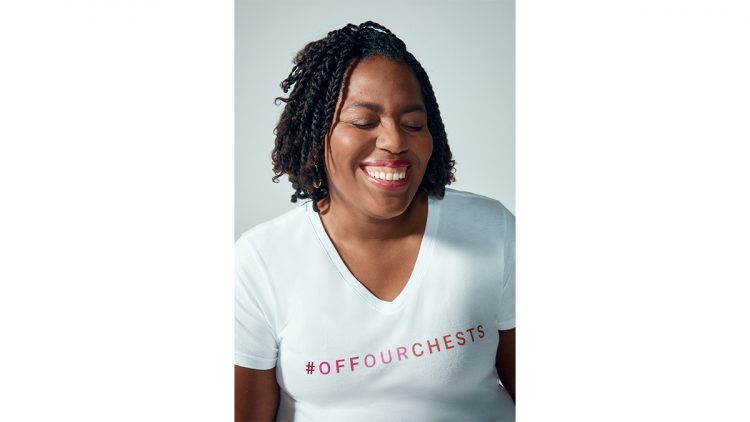 Kara was 31 when she was diagnosed with stage IIB, triple positive, high grade breast cancer. After 16 rounds of chemotherapy, a full year of targeted therapy, she is now one year in remission. She believes that every breast mass deserves attention and is a vocal advocate for her patients. Cancer has taught her the strength of solitude but also the importance of togetherness.

We had the chance to talk with Kara. We’re honored to share her words of wisdom.

Contents hide
1 On Being a Doctor:
2 On Medicine:
3 On the Reality of Television:
4 On Diagnosis:
5 On Working Through Treatment:
5.1 I tried to not let cancer affect anything else, but it does…it affects everything.
6 On Treatment:
6.1 But then you feel guilty and think: Did I drink too much alcohol or did I eat too much cake? Am I going to be putting myself in danger again?
7 On Side Effects:
8 On Community:
9 On The Breasties:
9.1 While your family is amazing and that support system is key, you also need people who actually understand what you are going through.

On Being a Doctor:

I chose to be an OB/GYN. I knew I wanted to do this before I entered medical school. The idea of working with women, working with patients who identify as female, particularly young women that are just coming into their own and grappling with birth control, sexuality, and child bearing interested me. I’ve always found a really strong pull to those areas. There was never a time I contemplated doing anything other than OB/GYN. I tell people that if I didn’t do OB/GYN, I wouldn’t have become a doctor.

My great-grandmother, who incidentally is still alive and is going to be 100 this year, would always laugh and joke and say, ‘You always wanted to be a doctor so you could take care of me and give me medicine when I got older’. It’s funny because I definitely don’t deal with an older population as a rule… but [she said this to me] before I could even remember. I’m not really sure what drew me to wanting to be a doctor, but I can’t remember a time when I wanted to do anything else.

People are always surprised when I tell them I love Grey’s Anatomy. I think I’ve watched every single episode, countless times, always eager for it to restart in the fall. But there has scarcely been a time where an obstetrics scenario has played out in the show and me and my friends aren’t just like, ‘Oh gosh, everything is wrong. This is just terrible.’ It just gives everyone the wrong idea about [obstetrics & medicine]. They get almost everything wrong. But, we can’t help but like it.

What do they get right? …Nope. Nothing. They get everything wrong but I still think it’s great to see medicine in a way where it doesn’t have to be grueling and dark and not fun. It can be fun! And we do have fun at work. There is not a lot of sex in weird closets… but the camaraderie and the way the team works together, thats legit. That’s really how it is. That part’s true 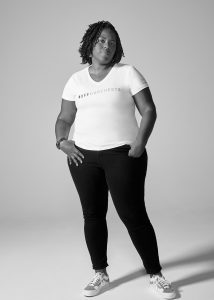 Like many young patients I did essentially diagnose myself. I felt the lump myself. And like many doctors, I ignored it because doctors are notoriously bad patients. That’s not a fallacy, that’s true.

So I ignored it for several months. It was because I was studying at the time, trying to get the last step of my board certification done and I needed a singular focus on that.  I got a mammogram ordered after my board certification was done. I approached another coworker and was like, ‘You need to order me a mammogram’ and I put all of the steps into motion. Even though I was on call, I still had my mammogram and biopsy done. It was hard to keep working and take care of patients, while also worrying, What if this biopsy comes back positive?

When I told my close friends and my family everyone was like, ‘Oh no, it’s going to be fine. You’re young. It’s going to be benign.’ And I was like, I don’t know that is it. If it’s not, I need  to be prepared.

On Working Through Treatment:

I was treated at the hospital where I worked. I continued to work for most of my first few rounds of chemotherapy. My coworkers were there for that, watching as I suddenly became bald and was still coming to work. I think a lot of people tried to pretend it wasn’t happening at one point, because that’s what I was doing. They took their cue from me.

I felt in the beginning that it was super important to not let the fact that I had cancer affect anything else.  Least of all, my work. Which looking back at it, maybe that was a mistake. Because it [cancer] does affect everything, right? You can’t pretend that it doesn’t and I struggled a lot during that time when I was working and also getting treatment, because I didn’t feel good. I still had to work. But I did that to myself. I could have taken the time off but I was like, ‘Oh no, you’re fine, you’re okay, you can handle this.’ And handle it I did… but looking back I don’t know that I would have done it the same.

I tried to not let cancer affect anything else, but it does…it affects everything.

Treatment seemed to go on forever. I’m triple positive which means I am Hormone Receptor-Positive, meaning estrogen and progesterone, and also receptive to HER2. Most people said it was a good thing that my cancer was positive and receptive to all three. And indeed it is because there are a lot of targeted treatments for all of those things. But because of that, it seemed that treatment would go on forever and ever. And indeed it continues on.

I had 16 rounds of chemotherapy in total. And a full year of targeted HER2 therapy. Now that’s done, I continue with hormonal therapy to block the estrogen and progesterone to decrease the risk of recurrence. What that means it that every month I get an injection to essentially put me into ‘medical menopause’. And then an additional medication to block any other estrogen that’s circulating in my body. So I’m 34, but I may as well be 64 for the way that my body feels sometimes.

That treatment goes on for 10 years and I’ve completed 2 of the 10 years. It’s still ongoing. When people wonder why I am so immersed in and involved with breast cancer, it’s because it’s still part of my life. It’s still here.

I’m cancer-free in the sense that there is no cancer in my body for which I am immensely grateful, but I am continually working to keep it that way by taking these medications and making sure that my lifestyle can support that. I have to make sure that I’m taking care of my body, that I’m eating well, that I’m exercising. There’s a constant pressure to do everything perfectly so that the cancer doesn’t come back, which nobody can do. I know lots of people who did everything perfectly and the cancer still came back.

You have to live. But then you feel guilty and think: Did I drink too much alcohol or did I eat too much cake? Am I going to be putting myself in danger again?

But then you feel guilty and think: Did I drink too much alcohol or did I eat too much cake? Am I going to be putting myself in danger again?

I had a lot of weird side effects. I had neuropathy. My hands and feet would tingle and burn. I’m a surgeon. I use my hands every day. I should have stepped back, worked a little less, and dealt with what was being thrown at me. Not feel like I had to be everything: a super strong, superwoman. Just allow myself to feel a little more vulnerable. 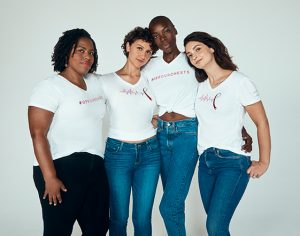 While your family is amazing and that support system is key, you also need people who actually understand what you are going through. No matter how much your friends and family love you, they don’t know what you are going through. This community [The Breasties] that we are fortunate to have found through social media are women who truly know what I’ve been going through. It’s so comforting to have that and to know that if you are in a rough moment, that you should and can reach out to those people who have been in that same rough moment. That’s how you know you can get through to the other side.

When we had Camp Breastie back in May, there were so many active things to get involved in. Especially if you are just coming out of treatment because it’s hard to start being active again. They had yoga classes and dance classes. They understood that it was a challenge to be active and would cater to people at varying stages of their treatment. It was a safe space to re-explore the active way in which you lived before breast cancer. I didn’t feel like I would be judged by the fact that my mobility and strength is altered from treatment because these are people who understand.

While your family is amazing and that support system is key, you also need people who actually understand what you are going through. 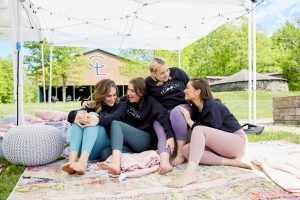 Visit here to wear your support for Kara and The Breasties. 20% of the proceeds will be donated to support their mission.

The Right Power of Pink